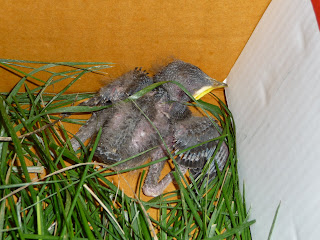 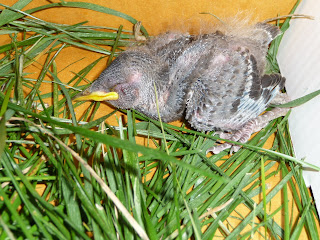 Sam found Rocky today laying on our front porch. We have one little tree in the front yard and it holds no nest. So he brought him inside and put him in a box and added some grass to make it homey.

A friend at work said her mom IS mother nature and she suggested feeding him with a 1cc dropper of cat food diluted in water and giving him that liquid. So we did that. (see video below)

(I got better at feeding him thru-out the night...at first I had a little difficulty getting it in his mouth. But we got it.)

We called our vet, they referred us to a wild animal care lady. She asked what the bird looked like, specificall it's beak, and determined that it was some sort of sparrow with sparkling in the name of it. However, its not native to Missouri so she couldn't take it in to her habitat. Sam told her where he found it, and she suggested checking the gutters for its nest. (we should have thought about that...) and VOILA! 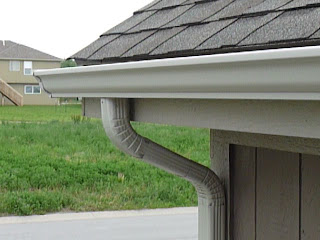 sure enough there were sticks and grass that looked like a nest was sort of meant to be there (you can't see them in the picture, but they were there). so, being the rehabilitators that we are, we put rocky back where he belongs. We also heard what sounded like several more baby chicks chirpping away. they sounded like they were comung from very close to the gutter, so we gently scooted Rocky closer to his family.

We came inside, having decided to let nature take its course, for whatever that entailed. Feeling like helped Rocky in one way or another, we at least got him up off of the cold, wet concrete and he could hear the sweet chirpings of his siblings. We were about to go on with the rest of our night: sam going to the gym, me and aves going shopping while he did so. a chore before we leave is taking Rex back outside so he doesn't go in the house. It rained while we were inside though, and Rocky didn't stay where we thought he would. Rocky took a rollercoaster ride right down the shoot of our gutter. We were wrong about where his siblings were. Though we know they are somehwere near the gutter, they must be in our attick or imbedded in the roof or something. because Sam went outside and there was rocky :( still alive, but it was the saddest scene, on his back with gutter water dripping on him.

I brought him back inside. I'm not nieve, I know the chances are super slim. But if I were that bird, I sure as heck would rather be in a soft, dry blanket under a lamp rather than the cold, wet rocks with water dripping on me. Alive or dead.

Rocky is still alive, I fed him some more cat-food-liquid and he seemed to chirp up every once in a while. We shall see.

Matthew 10:29 Are not two sparrows sold for a penny? Yet not one of them will fall to the ground apart from the will of your Father.
Posted by 0812 Lane at 6:01 PM