this is off-topic of ava. I know, bear with me. but it is so good I had to share. I check this mom's blog a couple times a week (SHE'S BRILLIANT WITH HER BAKING!) and got some really good ideas for ava's birthday cake(s)/cupcakes that I'm planning to bake myself (once we fix our oven). anyway, check this out: CINNAMON STEAMERS http://www.tongue-n-cheeky.com/2009/09/cinnamon-spice-and-apples-are-nice.html

it's SO simple and delicious. here is the excerpt on the Cinnamon Steamers that I'm referring to, tried first hand tonight and can almost TASTE winter and christmas and all the goodness that comes with that time of year (my FAVORITE time of year)!

Cinnamon Steamers
Drizzly days notoriously invite a warm book and a hot read.
Spice up your regular rainy-day routine with this simple, succulent beverage.
4 cups milk
1/2 c sugar
1/2 tsp. cinnamon extract
Dash of cinnamon
In a medium saucepan, mix all ingredients and heat just until steaming. Do not allow to boil. Serve in mugs topped with whipped cream or a sprinkling of cinnamon.

*I threw in there some white chocolate chips while I was heating the milk so they melted in and that was devine. not called for in the above, but certainly an added bonus*

**important to note: it's imperative that you use cinnamon extract, not only cinnamon spice. makes all the difference in the world**

and no, mine did not turn out that pretty. so rather than trying to come up with a competitive picture, I'll just borrow hers. 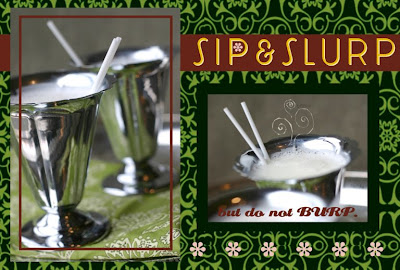