so I was headed to my small group tonight at church.  me and 7 other girls get together, talk about life, etc. (a friend oh-so-nicely put it as 'group therapy'.  it's whichever really.  therapy is probably the more HONEST term if you want to go that route, and I think I like that better. but it's really meant for friendship and spiratual growth.)

so on my way I called my love to see how baby girl was doing.  all was great.  she's not to the stage yet where she fully understands when I leave the house, what that really means.  that I'm GONE.  as in, not just in the other room anymore.


so I called him, and he in his sweet self thought it would be cute if he put me on speaker phone so she could hear my voice.  mind you, this game has worked more in the past, and is usually more enjoyable for the person with the baby, because all she does is look at the phone, tilt her head, maybe smile, and then put the phone in her mouth.  the person on the other end of the phone just feels like a real goof saying sweet nothings to someone who you know can't talk back.  still a fun game none-the-less.

this time was maybe THE MOST UNSUCCESSFUL attempt at a game we have ever tried to play with her and we failed miserably, crashing and BURNING like no other.  she screamed so loudly at the top of her lungs it's like I could hear the tears rolling down her cheek thru the phone.  he promptly had to fix the situation and get my voice to stop coming out of the other end as soon as possible.  he did whatever he needed to heal the broken heart(s) - mine included - and both girls were happy again.  what a great dad he is.

all is well when I got home.  she is asleep like an angel should be and I will not wake her to apologize for the earlier upset.  I just won't do it. we do go in every night to check on her though, usually about an hour after she's asleep, and it has to be one of the sweetest things to see. (for you non-moms you're probably thinking LAME-O.  but you just wait.) 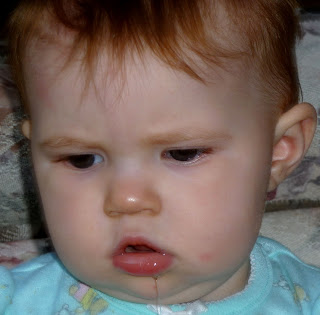