ava has learned how to laugh and snort at the same time. it might be the funniest thing I've seen in my whole 26 years of life. this barely catches the end of it, so it doesn't quite do it justice like the in-person version does. mostly she laughs at her puppy dog, but sometimes she thinks we're funny enough to deliver a snort. anyway, it's at the very end of this video. and if you really get her going, sometimes she'll snort 3 times in a row. priceless.

and then a couple of our weekend projects are here: painting her bathroom. the color is technically the washington redskins football color. looks more red in the picture, but really it's a maroon-ish. and the idea is that it will be her shabby-chic bathroom once we're all done with it. 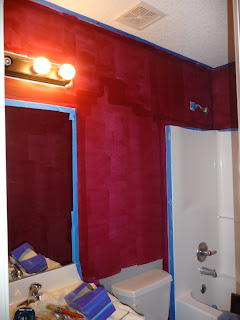 and (drum-roll please) the ceiling fan is finally in!! We've had this thing since probably february. and now it's in. doesn't it look great?! this is the handywork of my wonderful husband and my very helpful father-in-law, who I'm told did most of the work. Either way, I'm proud of them. I'll have to admit I was very skeptical when the electrician was a no-call, no-show and sam said "no problem. I'll do it."... 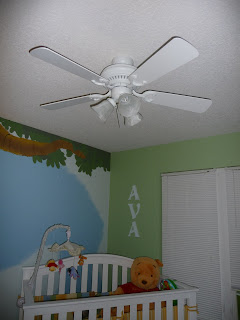