here is the really sad photo that just breaks my heart. 10 weeks old, she shouldn't have to feel so crappy quite yet in life. 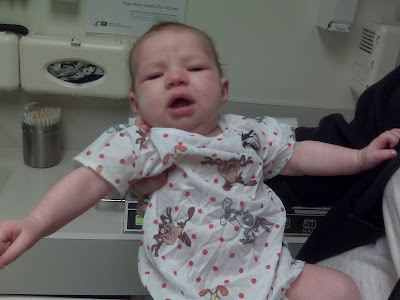 Ava has been sick for a few days with a bad cold - runny nose, cough, etc. Plenty of eating and diapers though so we'd just been watching her. I took her to the dr Wednesday and they listened to her lungs and thought she just had a cold. Dr said we can give her tylenol (for infants) but that's about it because she's too young {10 1/2 weeks} to have any other kind of medication. So we'd been trying all the other tricks of the trade that we'd heard...vicks baby vapor rub on her feet; humidifier with cool mist in the room; saline solution in the nose & sucking it out with a bulb syringe.

Then yesterday she threw up after eating {and even struggled with that because she kept choking because she couldn't breath real well thru her nose to constantly eat with her mouth}. So I called the Dr office AGAIN and asked what to do. {Side Note: I work with a friend who has 3 kids - one of which has had retractions before -- where the ribs go in and belly comes out a lot when breathing -- having to work extra hard to catch breaths} I told the dr all her symptoms including the retractions and the nurse on the line says "Call 911". I said "What?". She said "Call 911. In case your baby gets too tired of breathing, you want them there with the oxygen". So we did that, Fire truck came, they gave her oxygen which definitely helped her, even though she still had been breathing okay, just not great. Fireman said by the way she was still able to put forth a pretty good cry, he expected that we'd be fine driving her to the dr or to the hospital, whichever we chose. So we called the Dr again and they said just go straight to Children's Mercy - they can do more for her there than the dr office could, especially since I had just seen them the day before.

So Megan drove, I rode in the back with my little angel and we got her to the ER. she was a little trooper. They couldn't give her breathing treatments {again, because she is too young for the medicine} so they stuck a long tube down her nose and suctioned her out--which, I've now learned is WAY worse to sit thru than her just getting shots. She cried so hard that I cried. I can't help it. I'm my mother's daughter and am a leaky faucet. I felt so bad for her. BUT -- when it was all done she snuggled right in my arms and drifted fast asleep and could breathe so easily. Sam was able to leave work and be with us too until we waited on the test results to come back to find out if she has RSV or not. and :( she does. RSV is a lot like a bad cold in adults. But in children under 2, it takes a much worse toll on their little bodies. You can read about it at the WebMD link. Pretty much the Dr said "it's bad. and she'll have it all winter."

We go back to the Dr today for her to get looked at again -- and possibly suctioned out again. The only way that will be easier to sit thru this time is because I'll know how much easier it will be for her to breathe.

I was nervous going to sleep last night, but the Dr said that Ava should sleep at an angle. So -- what better sleeping position than me just holding my baby sitting up :) so we did just that. We snuggled on the couch with pillows propping me up and her in my arms in a sitting-up position. This way I could feel her breathing and could feel when she'd cough or spit up and would wake-up instantly (hopefully!). We had no problems last night and she slept like the angel that she is. I love her.

My best friend and her baby had to stay at Children's Mercy for two days becuz she had RSV, too. Poor thing... she was only 2 or 3 weeks old. It's really going around like crazy. Two other babies at my church were both hospitalized from it as well... one baby at a year old and another at a couple months. I'm glad she's feeling better! She is so beautiful and looks just like her mama!! So cute!