Ava had her 4 month check-up on Friday and all is well! They had to give her more shots (she cried a little, but she's a trooper).


the social skills I think are probably her forte. no surprise there. she's also getting better about coo-ing and babbling. sometimes we hear her in the car just babbling to herself. the rattle holding she's working on. she certainly has a good grip (as her cousin Jules found out last night when she about lost a patch of hair due to Ava's accidental grasp of whatever was near, ie: her golden locks). And the gross motor, well she is perfecting her roll. Now she's taken it to a whole new level and decided she's too good to sleep on her back since she has the option of sleeping on her belly. we must've rolled her from belly to back 3 or 4 times last night in attempts to not wake her but still keep her sleeping on her back. To no avail, she woke up to eat. So first things first we fed her. We put her back to bed on her back and we both woke up this morning at 7am to find that she was sleeping soundly in her pack n play...ON HER BELLY. her head was turned to the side, she was breathing fine, and the dr said as long as there are no blankets/animals (stuffed or live I imagine)/pillows in with her and if she is more content and comfortable then don't spend all night flipping her back over. so, to each their own. I know back sleep is best sleep. but I also know that stubborness is a pretty strong trait that runs in our family and no doubt she's carrying that one on (I'm sure my parents are THRILLED of that by the way).


Things we'll be working on at our house to impress the doc for 6 months is:
pulling up to sit; sits with minimal support
raking grasp; regards raisins
single syllables; turns to voice (which she already does that); imitates sounds
feeds self; works for toy


:( wow. feeding herself? saying single syllables? that's only 2 months away!! someone please tell me how to make time stop. 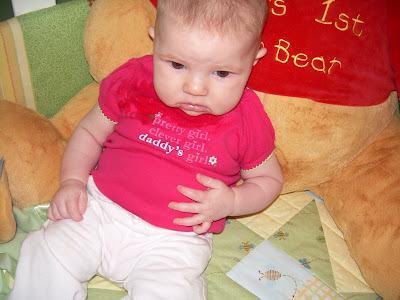 Do you use parents as teachers? I love PAT day! It is fun to learn different ways to play with them and to see them do the things they should be doing! And the best thing is that it is free!

By the way, she looks so adorable!